DRAUMA- a drag journey through trauma

Drauma derives from the words drag and trauma. Drag because its the best way to express ourselves without being too serious and trauma because in Greek it can also be translated as scar. The idea behind it is that scars from everyday battles such as illnesses, pregnancy or self harm can be worn as jewels on the bodies of the survivors. We see this project in the context of body respect as a chance to talk about different kinds of trauma physical or psychological, and how wounds and scars can make people stronger and proud of who they are.

(Olie) This project for me was the retelling of my own traumata. I have lots of scars on my body, some even from my own drag performances. I wear them like medals, medals that remind me of my life, of who I am.

The art song that we used is “Im Treibhaus” by Richard Wagner from the Wesendonck cycle. This song describes flowers that are trapped in a greenhouse and though they radiate beauty and light they are not in their natural environment. This metaphor of a trapped plant gave us the inspiration for the person in our story. Is she trapped by the social idea of gender, by her own struggles and scars, trapped by a hard painted exterior?… All those contrasts, the baritone voice with the female attire, the scars that up-close look like jewels, an artificial creature in a natural environment add up to a complex beauty that leads to liberation…

(Georgios)As a gay baritone, in a very hetero-normative business, where people always expect me to be super masculine because of my voice, this project is a personal liberation from all those expectations and molds that can cause so much insecurity.

Our main aesthetic influences come from the maximalism of drag, big hair, strong figures, lots of makeup, sparkles. Drag creatures are meant to stand out, not to fit in and that is exactly what our creature in Drauma does. She is hurt, but she is proud! Also one of the biggest inspirations was a steel tower on the mountain of Seih Sou (see photo) which reminded us of a kaleidoscope. Kaleidoscopes are a classic toy  that takes a rather boring image and through reflection and light creates something exciting and beautiful… like drag does. This steel tower/kaleidoscope ends up being the prison for our creature.

During the conceptualization we were heavily influenced from a violent and deadly event that happened in Greece in the recent past. Our sister Zackie Oh, born Zak Kostopoulos, was a drag artist, a non binary person, an HIV activist and human rights defender from Greece. On September 21st 2018, Zak /Zackie was brutally beaten to death by two men in broad daylight, after entering a jewelry shop in central Athens, while surrounded by an angry mob, filmed by onlookers, and further brutalized by the police. Their murderers have been recognized but released and there has been no action taken against the police officers involved. The trial date had been set for October 2020 but was further postponed due to the Covid-19 pandemic. This incident is a deep trauma for the Greek LGBTQIA+ community

First we had long discussions about the concept and how this could be brought to life. The difficult part was to narrow down the hundreds of ideas we had in order to get our message across. Which pieces were important, which locations are the best, the dresses, the makeup… Once those were decided we started researching and planning.

The recording took place at the music academy in Essen, Germany with the conductor Yorgos Ziavras and it was done simultaneously with professional equipment and with a simple smartphone, recording music and video at the same time. We decided to use the raw smartphone version in order to give the warm feeling of recording in a living room and not a more sterilized result. The music preparation though started long before. 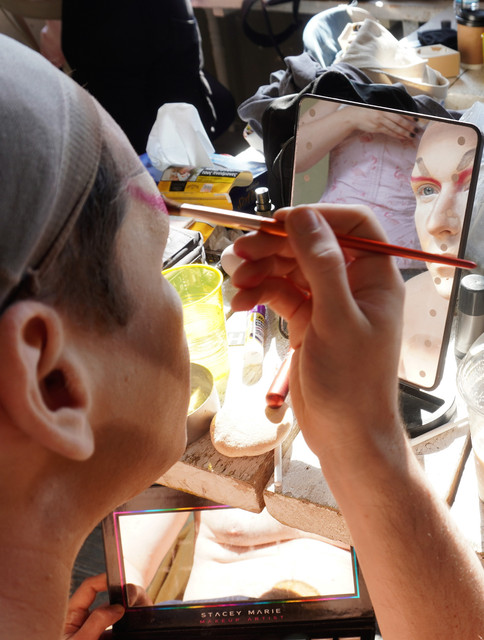 (Georgios)I have been working with Yorgos since 2012 when we first met at the University of Cologne during our studies. Since then we played tons of recitals and we have worked in many operas where he was conducting and I was singing. Throughout the years we have developed a common music language that allows us to be ourselves and feel free when we work together.

The first piece that you hear is the Op3,I Andante from the five piano songs by R.Strauss and was recorded by Yorgos in a broken, out-of-tune piano in Mönchengladbach, Germany. The reconding was used then in diffirent tempos and pitches to give a nostalgic and quite creepy effect.

Then we started constructing the pieces. A larger than life hat and coat made of burlap, wire, stones, hot glue and desperation. A neck piece that would hide the tracheotomy with feathers and velcro. A skin color undergarment where the c- section and the nipple incision was embroidered with stones, beading and enhanced with makeup.

(Georgios)With my partner, we bought a sewing machine and with our very limited skills we managed to sew two pairs of gloves a red and a white (sewing a glove is harder than it looks) and a whole draped velour dress.  We also turned Olie´s living room into a green screen room and used 3 very strong headlights which made the room feel like an oven.

This process lasted around two weeks. 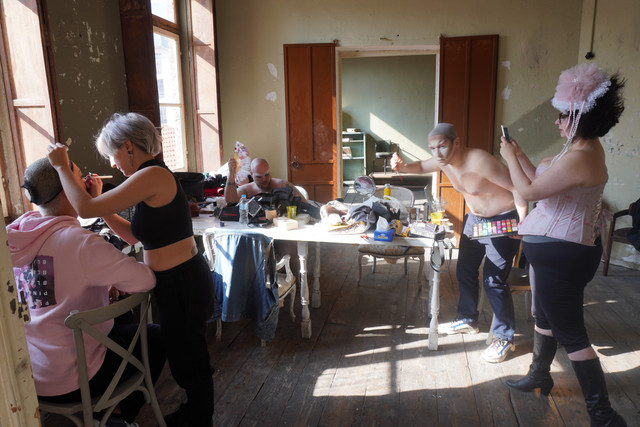 (Georgios)The first day we went outdoors on the mountain of Seih Sou in Thessaloniki. This meant that I had to be ready in full make up, body and dress (procedure that takes me about 3 hours) and travel through the city in full drag plus the mask! It was fun and scary at the same time. The location was beautiful, the light was perfect, we had a stunning view of the city and this filming was a lot of joy.

On the mountain of Seih Sou we discovered a steel electricity tower. Sitting under it, felt like a cage but we could still see the nature around. Just like flowers in a greenhouse.

Second day of filming was the hardest one. We had to film in two locations, Bensousan Han where we only had 1 hour booked (because of the renting cost) and at Olie’s “green- screened” living room. Bensousan Han is a 200 year old, preserved inn, in the center of Thessaloniki that is now being used as an art space. We were very blessed to find a date to use this amazing location and very thankful that the owner allowed us to get ready there. This place was perfect to show our creature in a diffirent light, powerful, having fun, socializing, enjoying life. 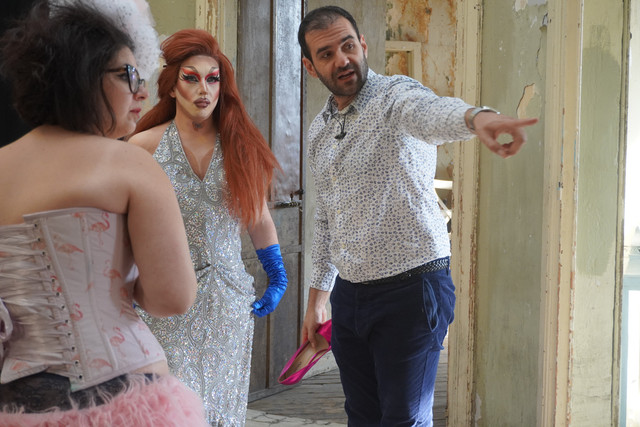 Our preparation started at home where Olie created the suicide scar on the hand and the tracheotomy on the throat using latex, rhinestones and makeup. Then all the performers got ready- drag takes a lot of time- and we filmed individual scenes of every person doing an everyday gesture that could imply trauma, and also group scenes of fun, dancing, people coming together, being a community.

Until now we saw our creature being trapped and alone and also being happy and included. One thing was missing… stripping!

The rest of the filming took place in front of a green screen where the main show took place, with the revealing of the scars, the unpeeling of the performer’s sentiments. (Georgios)It felt like stripping down all the social constructs about masculinity and femininity, all the expectations of the world on our bodies, all the harassment and bullying that each of us more or less has experienced. 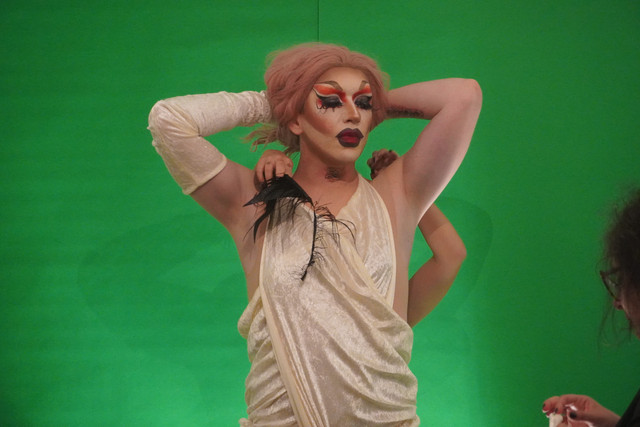 (Olie) Observing Nina gently shedding her clothes/her armor revealing her traumata- so much power emanating from them- she was standing there naked, unbreakable. It was an emotional experience that made my own “trauma-armor” stronger. Let me tell you I did cry like a baby but they were not tears in the rain. They were tears hammering on the forge that made me more positive, more proud of my body. And that was the idea from the start, body respect.

Even though there was a structured idea and stage direction, many things changed during this process. A lot of emotions and ideas emerged because of the locations, the interaction of the team, personal initiatives, improvisation. The project started becoming stronger and taking a life of its own!

(Georgios)It was a very complex process that involved a lot of technical knowledge that I acquired through youtube tutorials, help from friends and hours and hours in front of a screen. Something that a professional would do in a few minutes, it would take me an hour of research and another hour to make it work. I feel though that I have gained a new skill set and I am very thankful for that. Also it was a blessing to be able to occupy myself with art in those uncertain times with all the cancellations and lost work.

Drauma can be also performed on stage. The costumes refined and even bigger in order to read from a distance, a projection wall behind the performer using the video- art from our project, and the pianist also in drag can be a unique experience for wider audiences. It is a great chance to approach people who have never seen a Liederabend but are intrigued by all this new culture that emerged the past ten years with the fights of the LGBTQIA+ community, plus the exposure of this culture in the mainstream media with Rupaul’s drag race, Pose and several documentaries. 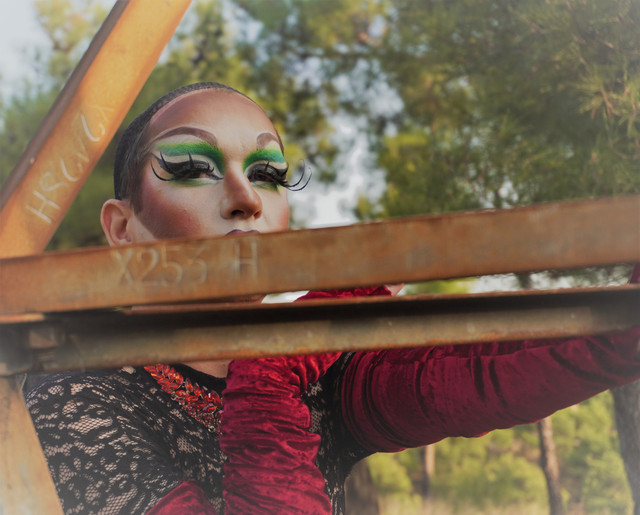 (Georgios)This project is the result of a long process of trying to merge the art of lyric singing with the art of drag. My goal is to create a whole show, based on the idea of a traditional Liederabend (art song recital) but in drag.  The art of Lied, unfortunately, is performed less and less and in smaller venues. I want to bring a freshness to this artform in a way that younger audiences can relate to it.

This project has made us all richer, wiser, it has extended our skills, revealed our weaknesses but most of all brought us close together in those unprecedented times and allowed us to make art while sharing our personal stories and always with a pinch of humour.

I don't think punk ever really dies, because punk

This website uses cookies to improve your experience while you navigate through the website. Out of these, the cookies that are categorized as necessary are stored on your browser as they are essential for the working of basic functionalities of the website. We also use third-party cookies that help us analyze and understand how you use this website. These cookies will be stored in your browser only with your consent. You also have the option to opt-out of these cookies. But opting out of some of these cookies may affect your browsing experience.
Necessary Always Enabled

Any cookies that may not be particularly necessary for the website to function and is used specifically to collect user personal data via analytics, ads, other embedded contents are termed as non-necessary cookies. It is mandatory to procure user consent prior to running these cookies on your website.

You don't have permission to register